Game Officials:
-league games officially presided over by two game referees & and a '3rd ref' located off rink
-other game officials include the timekeeper, statistician & goal judges situated behind both nets
-the referees are ultimately responsible for the functioning of league games, and may consult with the 3rd referee and/or goal judges when additional information is required in order to confirm a ruling

Game Delays:
-each team will begin a league game with at least 6 players
-a grace period of 10 min is permitted to allow a team to prepare 6 players to play
-if a team cannot prepare 6 players to begin a game; it must begin or will be assessed a delay of game penalty*
-a grace period of 10 min will be allotted to allow a team to prepare a goaltender to play; however a team is permitted to begin a game without a goaltender in play
*see 'Game Delays' Appendix for further details

CBHK Playoffs:
Overview: 3 Rounds of Best 2/3 Elimination Series' will determine the Championship winning team (this is following the 'Play-ins' in which the final 4 seeded teams will compete to secure the #7 & #8 seeds before playoffs begin -> 'Play-ins' are to be played on the Saturday preceding Round 1 of the playoffs)
-each series and series' individual games are to be played consecutively
-35 min games
-final 2 minutes - stop clock & 'no touch' icing in effect
-each team has one timeout per game; timeouts are 1 min
-7 goal 'mercy rule' in effect
-if game is tied after regulation: a 5 min, 4 on 4 OT will be played in games 1 & 2, and a 10 min, 4 on 4 OT in game 3
-If a goal Is not scored during OT: a 3 player North American style shootout will be used to determine the winner
**if the Championship Final game 3 ends in a tie: OT will be played until the championship goal is scored

"The Plays is Under Review"
If the referee cannot confirm whether a goal was legitimately scored, or must draw upon additional information before confirming a ruling; he may immediately declare that "the play is under review." The referee will ask both teams to return to their benches and then consult with the other referee, goal judges or 3rd referee in charge.
The referee will then communicate this decision to the captains, allowing them to address the call directly.

Disallowed Goal: A goal may be disallowed if the referee determines that significant encroachment of the crease and/or interference with the goaltender by an offending player took place prior to the goal being scored.

Goaltender Penalty: Called when a goaltender commits an infraction. The offending team's captain must choose a player who was on the rink at the time that the penalty was called to serve the penalty.

Unsportsmanlike Penalty: A player who receives two unsportsmanlike penalties in one game will receive an automatic one game suspension and the incident(s) will be reviewed by the CBHK Hockey Committee.

Unsportsmanlike Bench Penalty: A team penalty for unsportsmanlike conduct stemming from the team bench. The captain of the offending team must choose one player from his team to serve the penalty.

Handpass Violation: Permitted in the defensive zone only. Intent to play the ball with the hand is the determining factor when assessing whether a handpass violation has occurred. Unintentional contact between a player's hand and game ball will not result in a handpass violation being called. Faceoff is to be held 'all the way down.'

Penalty Shot:
-awarded when a defending player directly interferes with a player who has a clear path to the net on a break-away; either through committing an infraction or by throwing their stick at the player
-also awarded when a defensive player closes his hand on the ball in his own crease

Additional Rulings Related to CBHK League Games:
Clasping the Ball: A player may not 'grab' the game ball at any time; defined as wrapping his fingers around the game ball, regardless of whether any advantage was gained as a result. If called in the offensive zone, faceoff held in the neutral zone. If called in the defensive zone, faceoff will be held 'all the way down.'

Clearing the Ball Directly over the Rink Netting: If a player shoots the ball directly over the netting, a penalty will not be assessed unless deemed intentional, according to the referee's discretion.

Tripping Penalty: In additional to a standard tripping penalty, a penalty may be called in situations in which a player may not necessarily fall, but whose momentum may have been slowed and / or, according to the referee's discretion, was deemed to be a reckless tripping action on the part of a defensive player.

-       All players are expected to arrive for games no later than 10 minutes prior to opening faceoff.

-       Games are to end no later than 5 minutes after the hour, regardless of the game start time (this is especially applicable to the 10:00am time slot in order to keep all league games on schedule).

-       Each subsequent block has a brief grace period for player arrivals, game warm-up, and for organizing game officials. Games are to begin no later than 10 minutes after the hour.

-       Games can begin beyond 10 minutes past the hour* -> in the event of an unprepared goaltender and / or less than 6 total players being available. However, the "unready" team will be given a 3 minute delay of game penalty if the game is delayed beyond 10 minutes.

o   *Games can begin with less than 6 players - at the captain's discretion.

-       Time Management will be enforced by game officials to keep all games on schedule.

-       A team can take no more than 4 delay of game penalties before declaring a game forfeit.

o   Delay of Game penalties are to be assessed every 5 minutes beginning at 10 minutes after the hour.  For example:

-       Whereby a player is found to be in the crease as a goaltender is establishing position in the same area; as stated under the NHL rulebook (#69).  This infraction will result in a goaltender interference penalty.

-       CBHK further defines 'goaltender interference' as preventing the ability of a goaltender to make a save through movement inside or outside of the crease, and according to the referee's discretion. 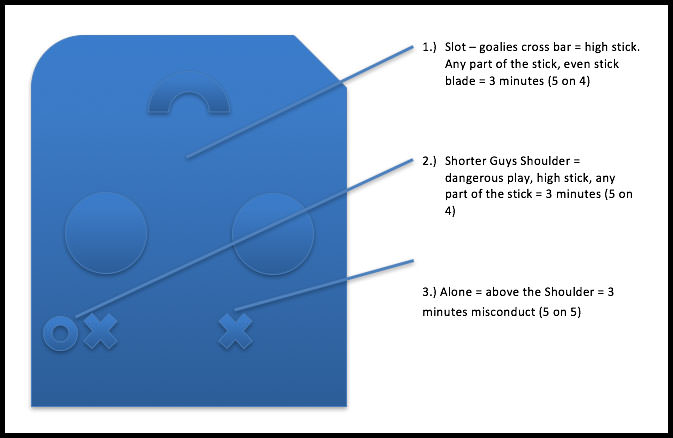